Angry Birds 2 hit our app stores at the end of July, the official sequel to a series of spin offs that sees a major revamp in the gameplay quality and its freemium sales model.

While this shake-up has angered some, there’s little doubt that pinging Red and his team across the screen is much more indulgent in terms of its graphics and user experience than before. There’s a real richness to the app which you seldom see anywhere else, while the game itself is as addictive as ever. You navigate your way through levels in a traditional fashion, shown on a map as a journey, while the game now features “bosses” every few levels, two approaches that are fairly old school in game design but welcome nonetheless.

However, the really amazing thing about this sequel is its download success, topping charts from its launch on July 30th. Some 20 million gamers downloaded the game in its opening week, which is frankly astonishing. Number one in up to 100 countries and the fastest downloaded on Android, in terms of digital reach, this performance shows that apart from the total number of devices we can get to, the velocity at which end users engage today is increasing.

This velocity is arguably more important than the size of the market. Whatever your critical mass needs to be for digital success, you can’t simply suggest that entire size of the market IS your market potential. Not everyone will get involved, but for those that do, they need to consume it quickly for a faster return. 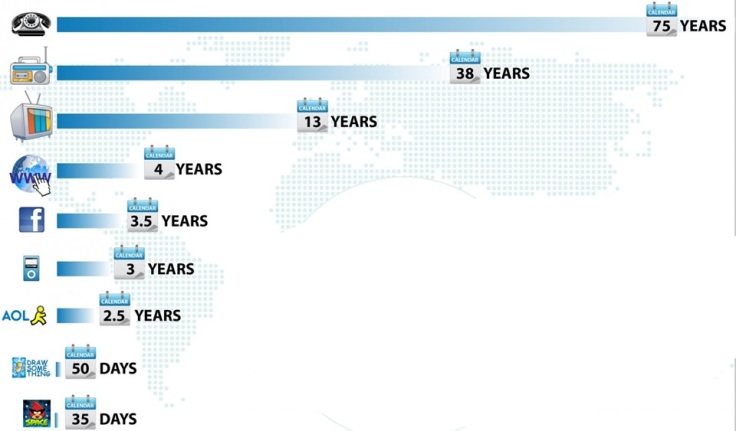 What is harder to predict is where the glass ceiling is to this kind of device penetration. Go back into the last century, and it was estimated that it took an estimated 75 years for the humble telephone to reach 50 million people, 38 for radio, and little more than a decade for TV. Other examples, as shown above, seem less plausible; did it really take 3 years for iPods to find 50 million homes? Note that Angry Birds Space, a predecessor to version 2, reached the same milestone in 35 days.

Yet at current rates, Angry Birds 2 will reach that total in around 18 days. Remember, this isn’t simply spreading news or a campaign going viral; these are people are responding to a call to action – in other words, making a conscious decision – in downloading an app, much as they would have once purchased a radio or TV.