Now the legs are beginning to hurt. My colleague and I wondered how many of the expected 182,000 CES delegates would actually walk the entire show; I reckon it’s probably a low figure, maybe 5-10% at most judging by the smattering of delegate badges already appearing in the perspex recycle bins, but we’re absolutely in that minority.

Today was spent at both the Venetian and Sands hotels, with a couple of meetings first and then working the expo in the afternoon. The scale of CES is bewildering at times; the LVCC took two full days of carpet-pounding and then you arrive at Sands to find two floors packed with more vendors. The Eureka Park floor – which looked like it once was or currently is a parking lot – was extraordinary, absolutely jam-packed with startups from around the world.

Highlights included some wearable tech from ProGlove, which features a built-in barcode scanner to save time and effort for workers picking goods. It’s a nice, simple example of adding technology to a wearable product (a protective glove) and their list of early clients was encouraging, suggesting that their product was well-judged.

We keep finding more small autonomous delivery robots, too. They tend to have lights to resemble faces and small cubby holes for storage. Interestingly, a mixture of navigation functionality is used. Some use LiDAR to find their way around, others record their journey and then replay it with additional orientation algorithms to avoid getting lost.

Also interesting was the Whill stand, where they were showing off their electric mobility scooters. Their newest models now have an autonomous feature that was being demonstrated. This could make a real difference to support services in this sector.

Elsewhere, as a keen cyclist I was pleased to see more tech appearing in this space. We saw a smart helmet, that can call for help if you crash, a wearable airbag and even a Zwift-style simulator targeted at older riders, to help them keep turning the pedals in their mature years. 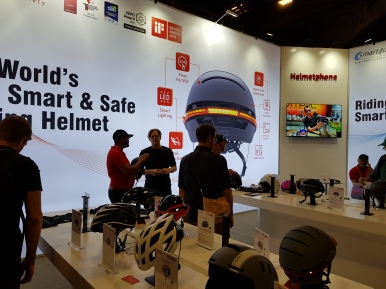 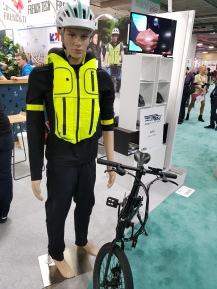 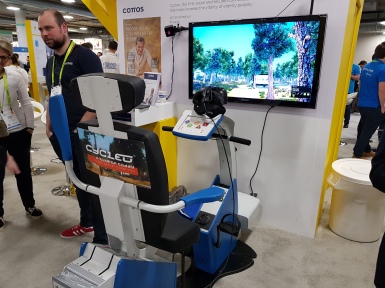 Sometimes though, it can be the smallest details that grab your attention. After finishing our thorough tour of Eureka Park, we spotted these branded escalator handrails. They’re always black, so finding them in pink really makes them stand out – a great marketing trick!

Finally, we’ve seen some Aptiv driverless taxis out and about in Vegas. They’re easy to spot with their red alloy wheels, and use the Lyft rideshare app. We tried a few times to summon one, but they’re pretty busy as one might expect. And all of them have a technician at the wheel to take charge in case anything goes wrong.

Final day tomorrow, where it’s sweep-up time – the chance to pick off a couple of areas of CES that deserve a second visit, and one area we spotted in the LVCC that we’d missed. Those miles aren’t done yet.